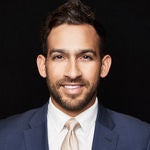 Michael Hector Moreno comes to the Moreno Family Law Firm as a bright young star emerging from the Santa Clara County District Attorney's office. Michael spent four years as a Deputy District Attorney where he built a glowing reputation in the criminal courthouse.

Notably, Michael spent over a year as one of the family law lawyers on the Family Violence Unit, a unit that solely prosecutes cases involving domestic violence. While on this team, Michael conducted twelve jury trials in one year, a reported record for number of trials on this team in a single year. For his efforts, the Santa Clara County District Attorney's office awarded Michael with the Robert L. Webb Award, an award handed out once a year to one prosecutor who has demonstrated outstanding trial advocacy.

Michael grew up in San Jose and graduated from Valley Christian High School. From there, Michael attended Azusa Pacific University where he received a Bachelor of Arts degree in English. While studying at Azusa Pacific University, Michael played football for the Cougars. In 2015, Michael graduated from Pepperdine University School of Law. There, Michael received two awards for obtaining the highest grade in the class, one of which was in Evidence, a class that would prove to be highly beneficial in Michael's future career.

If you think your case would benefit from the experience and responsiveness of San Jose Divorce lawyers and attorneys at The Moreno Family Law Firm, or if you’d like additional information, please call 408-266-9011 or send us a message through the contact form below.

Thank you for contacting us. We will get back to you shortly.

Please complete all required fields below.